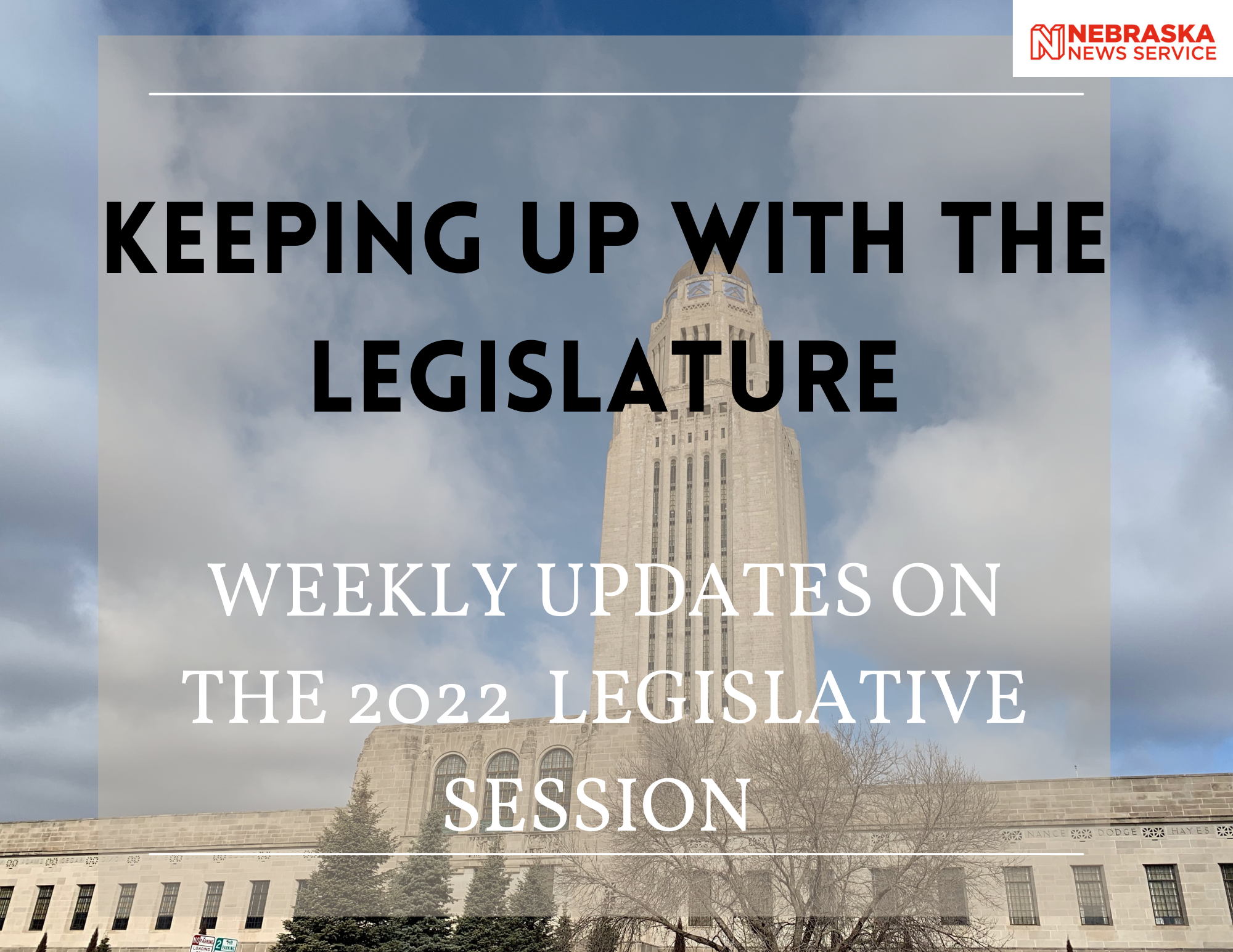 The Nebraska Constitution has required state senators to be nominated and elected on nonpartisan ballots since 1934. Sen. Julie Slama of Sterling proposed a constitutional amendment, LR282CA, that would allow voters to vote on ditching the nonpartisan election rule.  Slama said that listing party affiliation would prevent candidates from “deceiving” voters about their political affiliation and provide transparency. Supporters of the bill argued that voters deserve to know party information when choosing their representatives. However, several former state senators opposed the bill, arguing that the emphasis should be put on the individual senator and not the party. Venango Sen. Dan Hughes, chair of the Executive Board, said the bill had 10 proponents and 31 opponents. If passed, final say on the amendment would lie with voters in the fall.

The Legislature’s Government, Military and Veterans Affairs Committee considered a constitutional amendment from Albion Sen. Tom Briese that would allow the recall of the governor and state lawmakers. Unlike other states, there is no such process in Nebraska. Currently, Nebraska only allows the recall of local elected officials. State senators would need to adopt legislation to establish new procedures, but if LR268CA is approved, voters would see the amendment on the 2022 general election ballot.

Increased security for ballot drop boxes, as proposed under LB1263 by Elmwood Sen. Robert Clements, was considered during a Feb. 2 legislative hearing. The bill would require drop boxes to be securely fastened to the ground, secured with a high-priority lock few have access to, emptied each business day, compliant with the Americans with Disabilities Act and open no later than the sixth Friday before a state election or the fourth Friday before a special election. The bill would also require the Nebraska Secretary of State to be informed of each drop box location at least 42 days before a state election. Wayne Bena, deputy secretary of state for elections, said that all county election commissioners were provided with drop boxes for the 2020 primary election, but the commissioners lacked the authority to regulate them. Other supporters argued that secure drop boxes were essential to a fair and accessible election.

LB1230, introduced by Omaha Sen. Robert Hilkemann, aims to create a cancer education program in Nebraska. The bill would reallocate $500,000 annually from the Nebraska Health Care Cash Fund to a Nebraska organization to educate Nebraskans about the causes of cancer and available services. Hilkemann said that increased education and preventative measures can reduce cases of cancer exponentially. Alan Thorson of the Nebraska Medical Association said approximately 42% of cancers could be prevented by educating the public about screening, early detection, treatment alternatives, caregiver support, survivorship management and support for nutrition and physical therapy. No one testified in opposition to the bill at its Feb. 3 hearing and no immediate action was taken.

To encourage students to enroll in teacher preparation programs and stay in Nebraska post-graduation, Bennington Sen. Wendy DeBoer introduced LB1128. If passed, any Nebraskan resident who is a full-time preschool, primary or secondary school teacher could receive up to $6,000 annually in student loan repayment assistance for five years. Similarly, Elkhorn Sen. Lou Ann Linehan introduced LB945, which provides qualifying teachers up to $5,000 per year in student loan repayment assistance for five years. To qualify under Linehan’s proposal, a teacher must be a full-time, certified teacher at a public or private school with a completed bachelor’s degree and teacher education program at an approved university. The goal is to attract and retain young teachers, whose starting pay is relatively low compared to student loan debt. Both proposals asked the Legislature to allocate $5 million annually to the programs. The Education Committee heard both bills on Feb. 1, but the committee took no immediate action.

Under a constitutional amendment proposed by Bayard Sen. Steve Erdman, retail consumption and excise taxes could replace property, income and other current taxes. Erdman hopes that LR264CA, the proposed amendment, will boost employment and investment. He said at a hearing last week that implementing such taxes would be fairer, easier and less expensive for the government to regulate while creating equal revenue. If the bill is passed, the amendment would appear on the 2022 general election ballot. Supporters say the main benefit would be eliminating property taxes. They claim Nebraska’s property taxes are higher than the majority of other states, which may influence whether people move here or when they retire. Opponents argued that a consumption tax would disproportionately affect middle-income Nebraskans and would need to be at least 20% to generate the same revenue as the current system, which would drive retail business to neighboring states.

Fees for license plates may rise

A bill heard by committee Feb. 1 would change the license plate fee cap from $3.50 to $5 and change the plate issuing cycle from six years to 10 years. LB1259, introduced by Lincoln Sen. Suzanne Geist, would help combat the rising costs of license plate production. The current plate fee has not changed in 18 years. Jon Cannon, executive director of the Nebraska Association of County Officials, opposed the bill, expressing concern that a license plate’s durability would not hold up for 10 years. No immediate action was taken by the Transportation and Telecommunications Committee.

The Urban Affairs Committee heard LB1024 Feb. 1, which would aid COVID-19 recovery efforts in North Omaha. Omaha Sen. Justin Wayne introduced the bill, which would allocate $450 million from Nebraska’s American Rescue Plan Act to North Omaha. According to Wayne, the area has poverty rates consistently higher than the state average. The bill would create a North Omaha Recovery Special Committee of the Legislature. This committee would direct funds to North Omaha through grants targeted at housing and homelessness, small business recovery, community well-being and community assistance and programming. No immediate action was taken by the committee on the bill.

LB1151, sponsored by Omaha Sen. John McCollister, would provide $20 million to a newly created fund for projects at the Nebraska State Capitol. The bill would create the Nebraska Capitol Maintenance, Preservation, Restoration and Enhancement Fund, which could receive revenue from any source following the one-time $20 million transfer from the State’s Cash Reserve Fund. The Capitol is 90 years old, and McCollister argued that a dedicated fund was necessary to address ongoing maintenance and preservation projects. Kent Rogert, representing the Nebraska Association of Former State Legislators, said the building is facing nearly $200 million in projects over the next two decades.

The Nebraska Legislature Education Committee considered three bills that would end the requirement that teaching candidates in Nebraska pass a standardized test to show proficiency in basic reading, writing and math. The bills — LB1218 introduced to the Education Committee by its Chair, Fremont Sen. Lynne Walz; LB690 sponsored by Sen. Carol Blood of Bellevue and LB960 sponsored by Omaha Sen. Tony Vargas — would each address the state’s teacher shortage and could provide for competency to be demonstrated in college coursework or other methods.

State senators failed to overcome a filibuster on Monday, Jan. 31, for proposed legislation that would provide additional resources for students with excessive absences. The vote was 26-18, failing to receive the necessary 33 votes to end debate. Lincoln Sen. Patty Pansing Brooks introduced LB568 in 2021 moving to change state law that requires school districts to report when a student has been absent at least 20 days in a year, regardless of whether it is excused. The legislation would also allow truancy to instead be a factor in some juvenile cases but not a sole basis for court action. Norfolk Sen. Mike Flood, a Republican planning to run against Pansing Brooks for Congress, was among those opposing her legislation. Flood and Pansing Brooks are both running for the First District congressional seat. He and other opponents said Pansing Brooks’ legislation was part of a trend toward soft juvenile justice policies, according to the Omaha World-Herald. The Unicameral Update states it is unlikely the bill will show up again on the Legislature’s agenda.