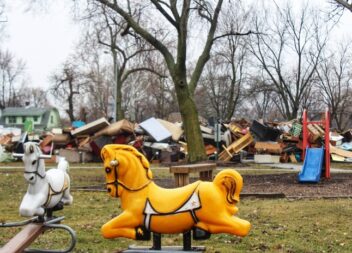 The devastating Nebraska flooding could be the beginning of a long spring flood season.

“The extensive flooding we’ve seen in the past two weeks will continue through May and become more dire and may be exacerbated in the coming weeks as the water flows downstream,” Ed Clark, director of the National Oceanic and Atmospheric Administration Water Center in Alabama, said. “This is shaping up to be a potentially unprecedented flood season, with more than 200 million people at risk for flooding in their communities.”

According to the Nebraska Department of Transportation, as of March 21, at least 15 bridges on the state highway system have been washed away or damaged. These include bridges located near Butte, Niobrara, Hadar, Schuyler, Genoa, Stanton, Pender, Dixon, Yankton and Spencer. The department will provide updates about repairs and detours for each bridge on its website.

Although some bridges and roads are still not able to be driven on, others have reopened and the NDOT has released plans for repairs.

On March 22, Highway 36 between Highway 275 and Highway 31 leading into Fremont has all lanes of traffic open, as well as Highway 77 in Dodge County near Winslow.

Work was to begin on Monday, March 25 to repair the road and bridges of Highway 15 between Linwood Spur and Schuyler, which was damaged by the Platte River flooding.

Other communities throughout the state continue to receive assistance and people are slowly beginning to return to their homes as waters subside.

On March 22, Sarpy County residents of Betty, Chris and Hanson Lakes were allowed back into their homes, while the communities of Thomas, Riverside Acres and Linoma Beach were opened on March 23.

In North Bend, the flooding began on March 14 due to a levee breach three miles outside of the city, and the local high school has been used as a Command Center for the town residents ever since. Last week, school was canceled indefinitely until residents were allowed back into their homes. According to the North Bend Eagle March 24, schools are tentatively scheduled to resume Wednesday of this week.

According to the Buffalo County Highway Department, many roads and highways are still damaged and precautions should be taken when driving. Residents of the county impacted by the flood are encouraged to attend a flood assistance event on Monday, March 25 from noon to 7 p.m. Relief assistance will be provided at the event.

Improvements have been made throughout the state with relief efforts, but it likely will be a long recovery process because of the potential of additional flooding.