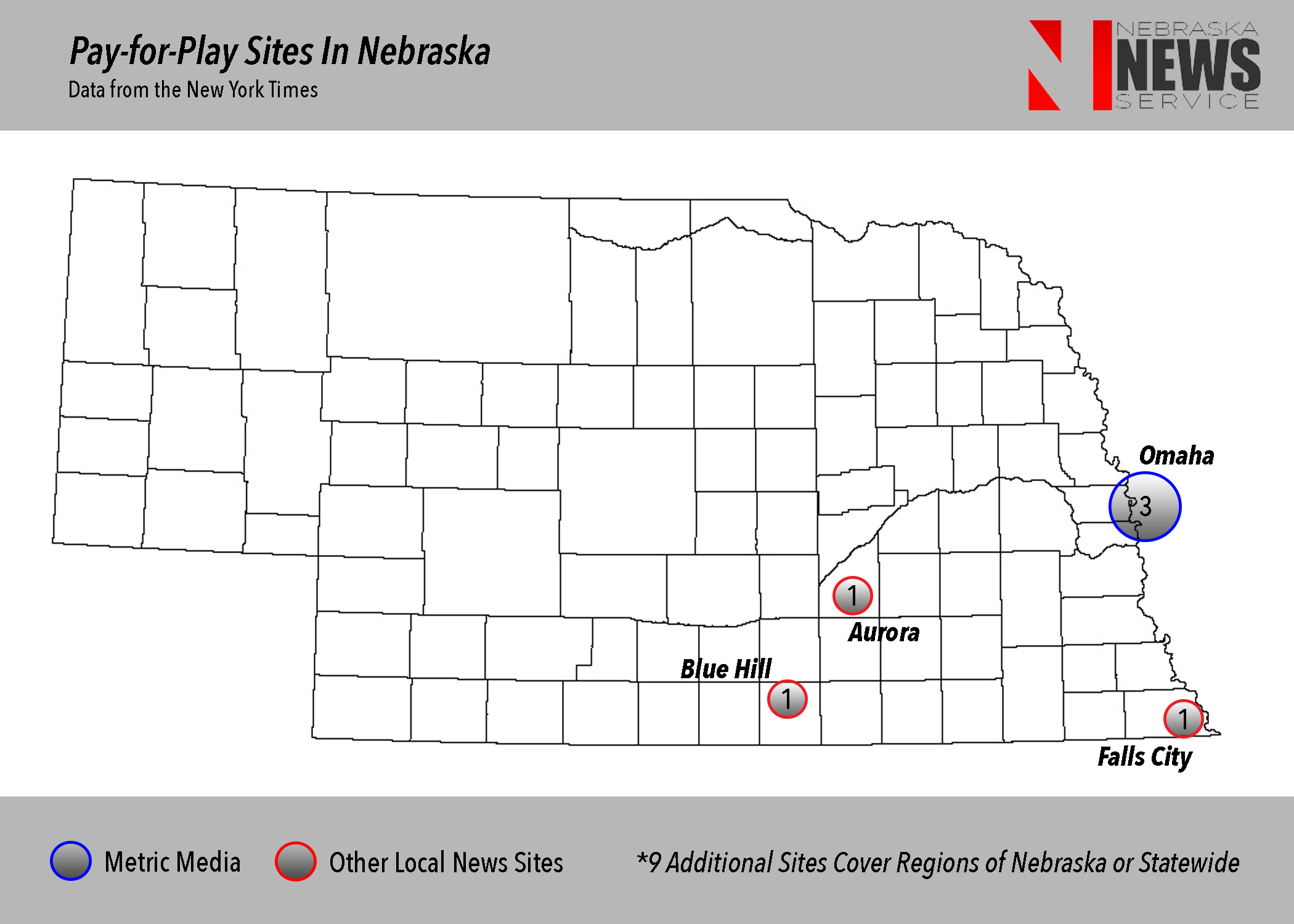 Fifteen of the 1,300 nationwide pay-for-play sites exist for Nebraskans

With an evolving digital landscape and a rise in misinformation, many newspapers around the country are struggling to keep the doors open, while others are trying to evolve.

Nebraskans look to local newspapers for information about their communities, and increasingly, much of that information is delivered a-la-carte via online and social media platforms. This structure makes it more difficult for news consumers to know what sources are staffed by community journalists and which are playing a new, less transparent set of rules. Nebraska has 15 pay-for-play sites.

“If there are 15 sites in Nebraska, it’s an issue. Probably a bigger issue nationwide, but it’ll eventually get bigger and bigger here,” said Dennis DeRossett, the executive director of the Nebraska Press Association.

On Oct.18, 2020, New York Times reporters Davey Alba and Jack Nicas published a story about a massive pay-for-play news network across the United States. Their investigation revealed more than 1,300 websites within the pay-for-play network. Fifteen of those pay-for-play sites directly target Nebraskans.

Pay-for-play news happens when money is exchanged for an unobjective news story, typically from a freelance writer, who can spread false and/or misleading information.

One of the biggest pay-for-play news producers in Nebraska is Metric Media, which owns 10 of the 15 reported sites in the state. One is owned by the Business Daily network and the rest come from other media sites.

Metric Media alleges to be a digital firm “established to fill the void in community news after years of decline in local reporting by legacy media.”

(Our team reached out to Timpone for a comment but was not able to get in touch with him.)

Also included on the list in the New York Times article were owned by “other news sites” and Business Daily Network.

Many of these sites feature identical designs. The Metric Media sites share content and not many updated stories.

With more and more of these news sites popping up and social media being a big influence, “News literacy is such a key thing today,” DeRossett said.

A 2016 study conducted by Stanford’s Graduate School of Education revealed that a majority of middle school, high school and undergraduate students struggled to tell the difference between real news and fiction.

“People need to know that their news sources are credible and be able to trust those news sources,” DeRossett said.

Regardless, Metric Media is looking to fill a void in local communities.

“They are not a legal newspaper in the state,” DeRossett said. “They’d have to meet the definition that’s set in statute.”

Kurt Johnson, co-publisher of the Aurora News-Register, was familiar with the concept of scraping, or stealing stories from another online news source. Johnson is concerned about several aspects of the Aurora Guide, one of the news sites that was mentioned in The New York Times article.

“I don’t think there’s a lot of legitimate reporting going on, and sometimes just literally stealing from other sites such as our own,” he said. “So it’s kind of made an impact on how much we post online.”

Johnson said that Aurora News Register is hesitant to post all of their weekly stories online because he fears that they will be scraped and put on another site like the Aurora Guide.

He said he was concerned with the legitimacy of what is happening with the Aurora Guide’s partisan nature.

Johnson has been an Aurora resident for more than 20 years and personally knows many of the local business owners. He was concerned when he saw a local realtor’s face advertised on the Aurora Guide site.

“I called and they had absolutely no awareness that they were on it, and they’re not paying anything,” he said. “So right off the bat, there’s an impression of legitimacy just because they list a bunch of local businesses.”

Johnson said that he assumed the site creators sourced the Yellow Pages for Aurora to find their local business advertising information.

Many of the businesses being advertised on the site can easily be found with a quick internet search of Aurora, Nebraska.

“So if they don’t have a website, they’re probably not on here because nobody has put a foot in Aurora, Nebraska, to make this a legitimate effort in any way, shape, or form in terms of the site,” Johnson said.

The Aurora Guide website also includes information that is not relevant in Aurora or Hamilton county, such as school board announcements from the Central City school district and emergency response team training announcements for Merrick county.

“This whole thing just strikes me as a pretty shallow effort to create something here that just doesn’t exist at this point,” Johnson said.

The Aurora News-Register is the main news source in Aurora. With a staff of 10, it puts out an average of 32 pages of news each week to the community.

“It does concern me that if somebody is just looking for content, sees the Aurora Guide, and even thinks that there might be something to it, that they really have done nothing to earn that,” Johnson said. “Whereas we have put a lot of blood, sweat and tears over the years. I mean, this newspaper [The Aurora News-Register] has been here for 140 years.”

Johnson considered ordering a cease and desist for the Aurora Guide site, but said that the amount of time and costs that would go into the endeavor would not be worth it.

He trusts that the Aurora residents know that the News-Register is the main news source in town.

Papillon resident, Todd Stuart, was not familiar with the three Omaha-based pay-for-play sites.

“I have never heard of any of those sites mentioned,” Stuart, 52, said. “I’ve never seen any of them when searching for news.”

“Behind the scenes, many of the stories are directed by political groups and corporate P.R. firms to promote a Republican candidate or a company, or to smear their rivals,” the New York Times article reporters said.

There is no evidence of smearing rivals on the Nebraska sites yet, but political issues and candidates are periodically covered.

The futures of these sites are unknown, but could have political significance down the road. Nebraska is one of the two states that allows electoral college votes to be split between political candidates. NE-2 voted blue in the most recent election, leading to uncertainty about what Nebraska’s political coverage will look like in the future on the pay-for-play sites.

“My gut reaction is to be cautious and not overreact,” Kurt Johnson said. “But I also don’t want to ignore the changing dynamic of this approach.”

Johnson noted that the future implications of the Nebraska-based pay-for-play sites could be significant for district two in future elections, but doubts they will with district three.

“Although we’re not in that district, you know, the second district in Nebraska, the third district where I live is very conservative,” Johnson said. “I would think we are probably less prone to have someone targeting [district three voters] because it’s just going to take a landslide change of philosophy for third district voters to vote democratic. That’s just our history.”

The Nebraska-based pay-for-play sites do not have social media accounts as of this reporting. This means that the ability to post the pay-for-play articles on a social media page, allowing others to share them easily, is unlikely.

This does not mean that social media pages for the sites will not be created down the road.

Kurt Johnson noted that the presence of smearing candidates on a pay-for-play website coupled with the posting of the article on social media could create traction for the sites.

“I think there has to be some traction or an issue that people want to engage with. And clearly in this last election cycle, there was one,” Johnson said. “I think social media is how they would do it. They’ve launched that website, and that by itself, I don’t think would just be explosive in our area. But, I think social media would probably be the avenue that they would utilize to ratchet it [site views] up.”

There is a chance that these Nebraska sites could turn partisan in the future.

“It’s really disturbing to the core for me as a publisher, one who’s devoted my life’s work to communicating on the local level with trusted, ethical and balanced reporting, to know that someone out there might want to dive into our community and try to persuade people to think a different way, based solely on political persuasion,” Johnson said. “So it’s disturbing, but it is probably a reality.”

Local news sites like the Aurora News-Register and the Alliance Times-Herald are successful and trusted news sources because they choose to report ethically.

Most papers follow their own code of ethics alongside the Society of Professional Journalists (SPJ) Code of Ethics. The first principle of the SPJ code of ethics is to “seek truth and report it.” It instructs journalists to “Take responsibility for the accuracy of their work. Verify information before releasing it. Use original sources whenever possible.”

In order to prevent spreading misinformation, the Alliance Times-Herald and the Aurora News-Register follow certain procedures.

Shaun Frierichsen, the director of operations at the Alliance Times-Herald, said he hasn’t heard about these sites, but he ensures accuracy and fact-checking sources is a big part of his reporting.

At the Aurora News-Register, reporters conduct in-depth investigation within the town. They provide readers context for the issues and topics in their stories, such as the recent proposal for a wind power generation facility and how it would affect the town as a whole.

Fake-news and misinformation are nothing new. These phenomena have been around since humans have begun communicating, but according to an article in the Oxford Research Encyclopedia, the way in which we consume misinformation and our likelihood to believe it is changing.

“New communication technologies have allowed for new ways to produce, distribute, and consume fake news, which makes it harder to differentiate what information to trust,” the Oxford Research Encyclopedia said.