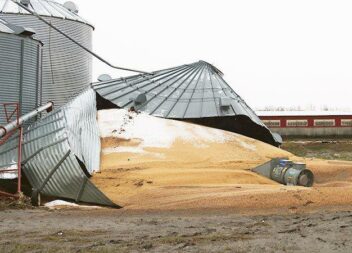 With vast land, and few citizens, it may seem Nebraska has little to offer at first glance.

However, at second glance, and to the residents who live here, the state means so much more.

We pride ourselves with our location, culture, tradition and even with our vulnerability and at the same time as priding ourselves in these values, it is also for these reasons that natural disasters seem to hit us so hard.

Known as “the Cornhusker state” and “the Beef state,” Nebraska’s agricultural culture is the best way to truly understand this state.

Corn and cattle are two of the top commodities produced in Nebraska and the state also leads the way in other categories such as popcorn and soybeans as well.

The state’s agriculture is historically essential to the amount of people around the country it feeds with its products, but it is also crucial for the continuous livelihood of those who live here as well.

“The importance of cattle feeding to Nebraska’s economy runs deeper than in other states” says the Nebraska Department of Agriculture. “Nearly 5 million head are finished and marketed in Nebraska, a state with a population of 1.8 million residents” meaning cattle outnumber Nebraskans nearly four to one.

As natural disasters continue increasing in intensity, many of these livestock and land areas are being lost.

Nancy Beers, Director for Midwest Early Recovery Fund at the Center for Disaster Philanthropy, said more people should be taking notice of what’s happening in Nebraska and the rest of the midwest.

“Nebraska is at the bullseye of agricultural climate change” said Beers, “People in New York City are going to start to care more when their beef prices begin to triple.”

The land that harbors the cattle is not the only way in which Nebraska’s land is facing negative leftovers from the disaster either.

Two thirds of the Ogallala Aquifer, which stretches through parts of 8 states, is located in Nebraska.

This groundwater availability has been essential to the success of agriculture in the state for many years, but with climate change beginning to make disasters more unpredictable, there are negative impacts it produces as well.

Acting as a natural blockade to incoming water, the aquifer disallows floodwater to seep into much of the ground around the state.

Much like how a lake simply doesn’t all seep away overnight, flood waters over a fully saturated ground has nowhere to go. These waters either finds a way to evaporate, fill into a natural body of water, or worse, fills into people’s basements, farmland and residential areas.

As homes are lost, livelihoods are ruined, and multiple generations of a life’s work is wiped away, many unexpected things can happen.

Beers said in her time with the Center for Disaster Philanthropy, she has seen farmers who tend to experience negative mental effects after natural disasters of this magnitude occur.

In 2016, the Center for Disease Control and Prevention (CDC) released a study suggesting those in farming, fishing and forestry occupations experienced a rate of suicide nearly five times that of the general population.

A reason, many people believe, is that farming requires a culture that prides itself in a “do it yourself” attitude.

“There is a lot of stoicism to farming, and farmers don’t like asking for help,” Beers said.

And with approximately 1 in 4 jobs within the state being farming or ranching, the state is at risk for a mental health crisis.

Living hand-in-hand with the Midwest culture is the history the region holds.

The history of the state and Midwest in general makes Nebraska a unique place when facing natural disasters. Many Nebraskans have an unparalleled connection to the land unlike many other places nationwide.

With much of the land handed down generation after generation, the same lot can stay within the same family for decades.

When memories are lost within just hours, it can have a tremendous impact, which although not unique to Nebraska, has been faced and overcome here before.

As many Nebraskans saw with the floods of 1950, 1993, 2011 and even now, there are a multitude of stories of triumph and teamwork that come out of these disasters.

Although the task seems daunting, both short and long term, there is enough resilience, dedication and compassion within the people of Nebraska to overcome this flood and not only learn from it, but better themselves within the process.

For anyone dealing with lasting mental impacts from this, or other natural disasters please don’t hesitate to contact the National Suicide Prevention Hotline at 1-800-273-8255.