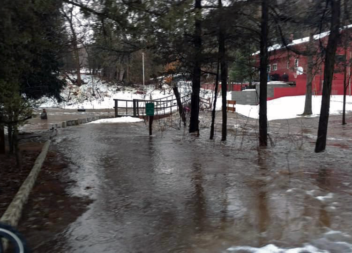 It has been ranked among the worst natural disasters Nebraska has ever seen.

On March 13, a bomb cyclone hit the state with blizzard conditions, drenching rains and historic flooding. Thousands of homes and businesses were lost, fertile cropland, highways and bridges were washed out and countless livestock were killed.

The storm’s impact still weighs heavily on communities across the state and continues to resonate among students at the University of Nebraska–Lincoln.

“It’s just crazy to think about,” said Zoe Cook, an English major from Omaha. “We’re landlocked, so I never think water is going to be a problem. It was just so shocking how it came so fast.”

Cook expressed her concerns for the economic impacts of the storm. It caused estimated damages of $1.3 billion.

“Nebraska is a big farming state,” Cook said. “So all of that farming land lost, all the animals lost and all the crops lost will be a really hard thing for the farmers to come back from. Then, the state as a whole, because it’s such a big source of our economy.”

For Tymaree Krusmark, an architecture major from Pender, the effects are more personal.

“My whole town was basically underwater,” Krusmark said. “My aunt’s and grandparents’ house and some of my house were basically all flooded. We just had a flood last June, and everyone got their basements redone, and then this happened again.”

She said the people of Pender, a town of roughly 1,000, are grateful for the support of their fellow Nebraskans.

“Over spring break, I couldn’t go anywhere because I had to help my town,” Krusmark said. “I think it has really brought out a different side of people. There are people that I thought didn’t really care, but they’d come out and volunteer. So I guess it really brings out the good in people.”

“I think I could be making more of an effort to get out and volunteer with the flood relief and stuff like that,” Lesher said.

Bessmer’s thoughts turn to how the floods have changed one of his favorite drives in western Nebraska.

“It’s sad to think that all houses that I drove by and all those fields for the farmers are gone,” Bessmer said. “I wish I could do something to help out, rather than just donate money. I wish I could actually go work with my hands to help the people in need — really feel like I’m making a difference.”

The university is developing a system to coordinate flood recovery volunteer opportunities for students, faculty and staff. Details will be announced. The campus community can learn about future service opportunities by joining the Nebraska Disaster Recovery Service Corps available through GivePulse. Group members will receive regular and timely messages about disaster recovery initiatives.